In Christ and Into His World

In Christ and Into His World

It was a city located in a beautiful area of what is now modern Turkey. It had been a prosperous place as it sat by a major trade route that connected it with much of the known world. It was the city of Colossae. Yet, by the first century AD, it was a city whose most glorious days were in its past. The Roman Empire had favored another nearby city, Laodicea, with trade and prosperity, so Colossae might have easily been overlooked with the spread of the Gospel through the work of the apostle Paul.

Yet, our Lord Jesus does not overlook this city which was filled with people for whom He died. While Paul is serving as a missionary in another nearby city of Ephesus, the Lord brings the message of His Gospel to the people of Colossae through their first pastor, Epaphras. Epaphras was under Paul’s supervision and led fellow Colossian believers into the truth that Jesus, by His Life, Death, and Resurrection, is the world’s Messiah.

However, the Colossian Christians begin to be tempted by false teachers to believe something other than the Gospel for their salvation. These false teachers may have sincerely believed their own teachings, which likely would have made them even more persuasive, and used terms familiar to Christians, but in ways that led them away from the truth of Christ. In response, Paul now writes his letter to the Church in Colossae which is the subject content of this study.

As you participate, whether in your own private devotions or with a small group, you’ll get the chance to explore important matters of faith which still impact our world today including:

• Christ’s role in the creation of all things.
• The sufficiency of Jesus’ sacrifice on the cross for the salvation of the whole world.
• The need to hold to God’s Word for true knowledge and the strength to resist false teachings that lead away from Christ.
• How our Lord ties us to His Life, Death, and Resurrection and unites us as His Church in the Sacrament of Holy Baptism.
• How we are to live our lives as new creatures in Christ and what the source of that new life is.

May our Lord guide your use of this study by the wisdom of His Spirit and equip you in your life in Christ! To Him be the glory!

Dr. Andrew Das presented a reconstruction of the situation that was facing the Church at Colossae which was the cause for Paul writing his letter. The webinar was held on Monday, October 10, 2022 at 7:00 p.m.

Below is a recording and the PowerPoint presentation.

Andrew Das, Ph.D. is a Professor of Religious Studies and Assistant Dean of the Faculty for Assessment and Accreditation Department of Religious Studies at Elmhurst University and author of the Concordia Commentary Series: Galatians. Dr. Das has been listed among twenty-five leading Pauline theorists of the last century in the textbook Perspectives Old and New on Paul. Another recent text, Approaches to Paul, devotes a section to his work. He represented one of the schools of Pauline studies in Paul in Perspective: Five Views (Baker, 2020). Many will recognize him as he authored the Galatians Bible study for the Concordia Commentary Series from Concordia Publishing House.

He has authored several books with leading publishers in biblical studies: Solving the Romans Debate (Fortress, 2007), Paul and the Jews (Hendrickson, 2003), Paul, the Law, and the Covenant (Hendrickson, 2001), Galatians (808 pages, Concordia Academic, 2014), and Paul and the Stories of Israel: The Grand Thematic Narratives of Galatians (Fortress, 2016). He co-edited and contributed to The Forgotten God: Perspectives in Biblical Theology (Westminster John Knox, 2002) and Scripture, Texts, and Tracings in Romans (Lexington/Fortress Academic, 2020). He is currently co-editing Scripture and Echoes in 2 Corinthians and Philippians (Lexington/Fortress Academic). His articles have appeared in such premiere venues as the Journal of Biblical Literature, the Journal for the Study of the New Testament, New Testament Studies, the Catholic Biblical Quarterly, and Biblical Research, as well as in edited volumes, including Paul Unbound (Hendrickson, 2009), The New Interpreter’s Dictionary of the Bible (Abingdon, 2009), Reading Paul’s Letter to the Romans (Society of Biblical Literature, 2012), Unity and Diversity in the Gospels and Paul: Essays in Honor of Frank J. Matera (Society of Biblical Literature, 2012), the Oxford Encyclopedia of the Bible and Ethics (“Galatians”), the Lexham Bible Dictionary (“Sadducees,” “The Letter to the Romans”), Sin and Its Remedy in Paul (Cascade Books, 2020), “With Gentleness and Respect”: Essays in Honor of Troy W. Martin (Peeters, 2020), Always Reforming: Reflections on Martin Luther and Biblical Studies (Lexham Press, 2021), Paul and Moses (Mohr Siebeck, 2020), The Old Testament in the New (“Israel’s Scriptures in Galatians,” Eerdmans, forthcoming), The Pauline Mind (“Israel,” Routledge, forthcoming), The Dictionary of Paul and His Letters (“Narrative,” InterVarsity, forthcoming), and the essay introducing the undisputed Pauline letters in the Oxford Handbook of Pauline Studies (on-line, 2017, in print 2021).

Needed Readings as a Participant in This Study

In chapters three and four of Paul’s letter to the Church of Colossae, he addresses the relationship between Christian slaves and Christian slave owners. In this letter, Paul addresses this relationship as it existed at his time rather than addressing the overarching morality of slavery, especially in light of all people being created in God’s image and equally redeemed in Christ Jesus. For further study on this matter, Paul does write a companion letter to this letter to the Colossians where he addresses a Christian slave owner, Philemon, with regard to a runaway Christian slave, Onesimus. Philemon was a member of the Colossian Church and Onesimus had come to Paul and had become useful to his ministry. For a further study on Philemon and the matter of slavery as it related to early Christianity, I heartily recommend the Concordia Commentary: Philemon from Concordia Publishing House.

Certainly, without a deeper understanding of slavery in the Roman Empire and with our more recent experience of race-based slavery within our own country’s history, the section dealing with slaves and masters can lead to great misunderstandings regarding Paul’s instruction in this letter. It may be helpful to note a few things about slavery in the Roman Empire before your group reaches that point in this study:

Paul’s counsel on slaves and slave owners would best be seen in our modern terms as Christian counsel given between employees and employers. Both groups should be mindful that they serve their Savior as they deal with one another and therefore seek to do so in a way that brings honor to Him. This goes both ways. Not only are employees [slaves] to serve their employers [slave owners] in sincerity because they are truly serving their Lord Jesus (who has called them to their various stations of life), but likewise employers [slave owners] are not to treat their employees [slaves] unfairly or cruelly because they too are accountable to the Lord who is their Lord.

May this brief explanation help provide clarity for your group when you come to that point in your study. May our Lord give to you and your fellow study participants His wisdom and a Christlike patience with one another as you address this challenging section of Paul’s letter.

A Word on the Colossian Heresy

As Paul writes to the church at Colossae, he has a pastoral concern about a heresy, a false teaching, which was brought to his attention by a report issued to him by what was likely Colossae’s first pastor, Epaphras. This heresy is tempting Christians away from a true relationship with Jesus. Paul does not name or map out all the details of this false teaching in his letter. However, from the details that Paul does give, here is a brief overview of the Colossian Heresy.

The Colossian Heresy was a rudimentary form of a false teaching called Gnosticism, which was more fully developed from the late second to mid third centuries A.D. While Gnostic beliefs varied depending on the teacher, a few of their basic beliefs were:

The false teaching which Paul addresses in his letter to the Church at Colossae was a blend of Jewish beliefs and practices, coupled with Christian terminology with Greek philosophic meanings that related to Gnostic teachings. The Colossian Heresy seems to have taught and held to the following points:

The Colossian Heresy was a religion of self-effort which ultimately (even while paying “lip service” to Jesus as an important figure) denied Jesus as God and Savior. It is likely that the teachers of this heresy sincerely believed their own teachings, but the sincerity of their convictions did not put their teachings on equal footing with the truth revealed in God’s Word as proclaimed by the Apostle Paul’s ministry. As you participate in this study, be looking for how Paul overwhelms the false teaching of the Colossian Heresy with the saving truth of the Gospel. 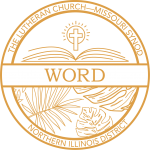 The work on this Bible study fits hand-in-hand with the NID’s mission pillar of WORD: Helping congregations be more centered on a rich life of Word and Sacrament, with congregational support in transitions as well as time of joys and sorrows.

And, our work together is supported by Resolution 1-02 from the District’s 2022 Convention: To commemorate the 500th anniversary of Luther’s New Testament translation by encouraging Bible reading.